They come and they go, another is nearly done.  Where does the time go?  Its been another busy weekend so far.

Friday, I motored up to Stamford to pick up Rufus and bring him back to ours for an overnight visit.  We had fun as usual.  Auntie Rachel was off work on Friday making a wedding cake for her cousin, she decided to do the finishing off at our house as we have more room in the kitchen and she wouldn't get pestered by her cats.  This is the finished result, I am sure you will agree it looks marvelous.  Emma and Nev wanted an all chocolate cake, this is the recipe she has used before - here.  The flowers were made by Stu's mum. 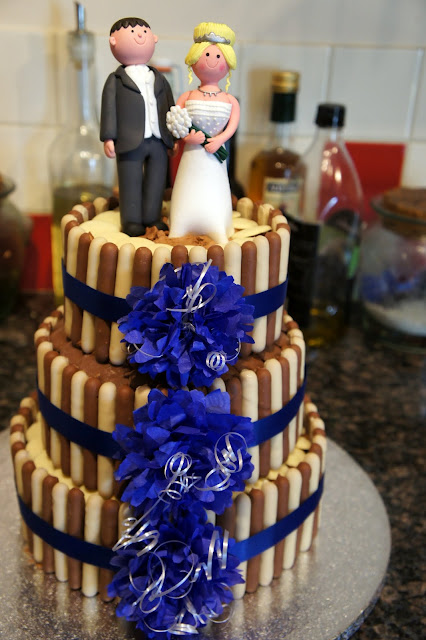 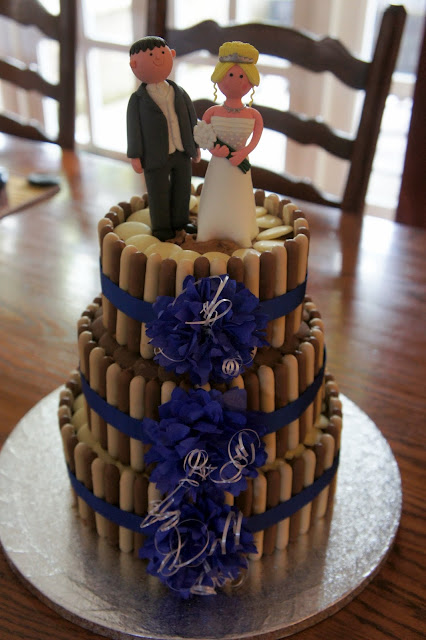 We walked the cake round to my sister in laws, leaving them to drive it to the venue!!  It did get there in one piece, thank goodness, though Emma ended up holding it on her lap all the way.  We then visited great Grandma and Pat, went to the park, played Duplo, waited, and waited and waited for Pops to get home, why are they always late when you want them home early?

Getting that last bit of ice cream out of the bowl.  See he is wearing his new jumper

Then on Saturday they hunted for the missing screws and nuts to fix the bike seat onto the bike. 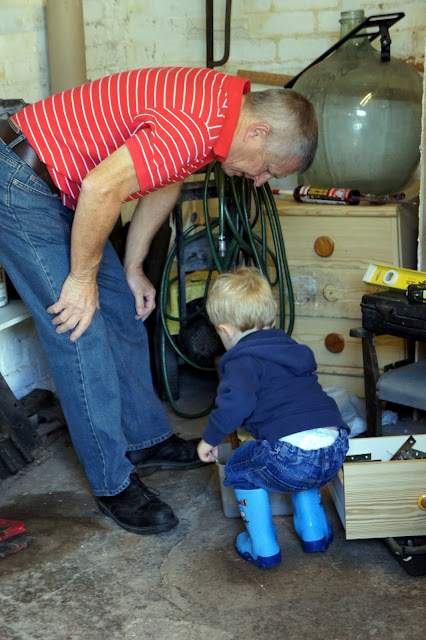 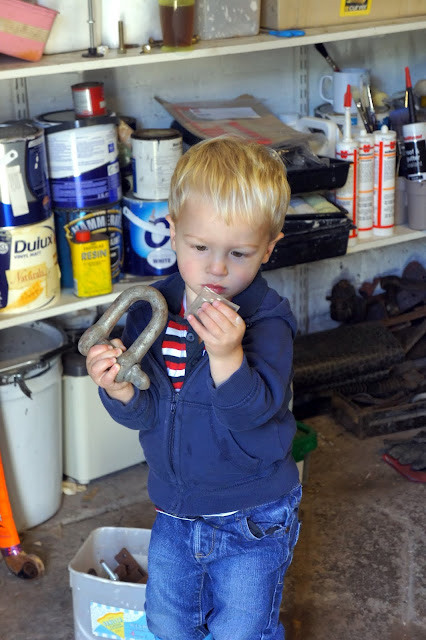 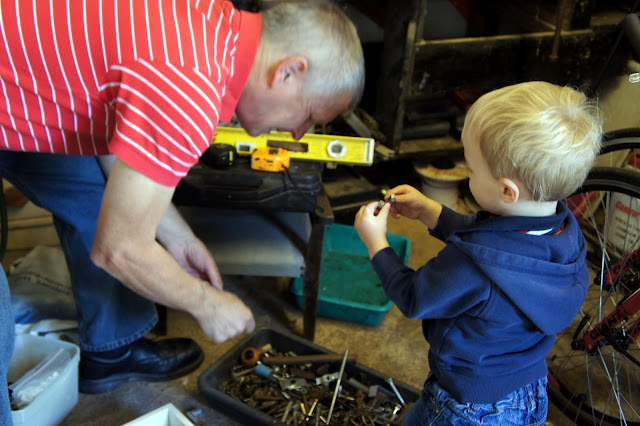 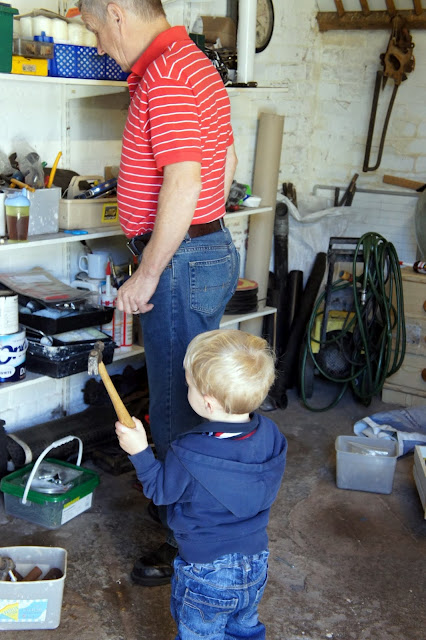 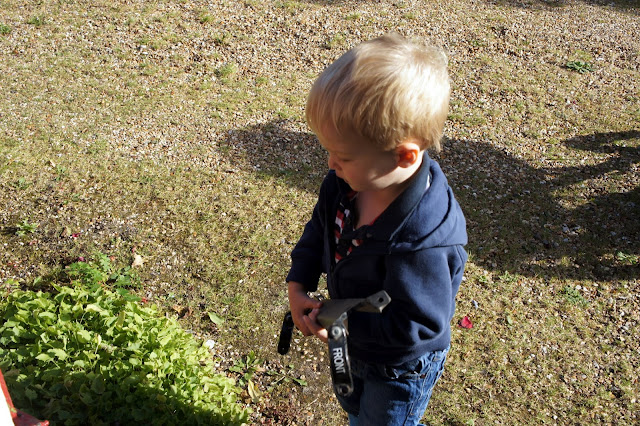 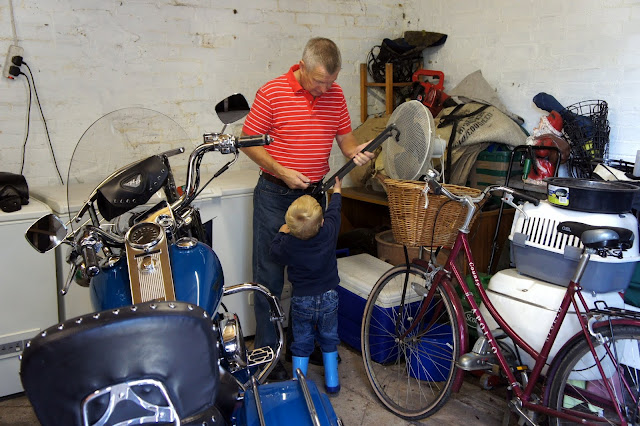 Then there was a bit of measuring 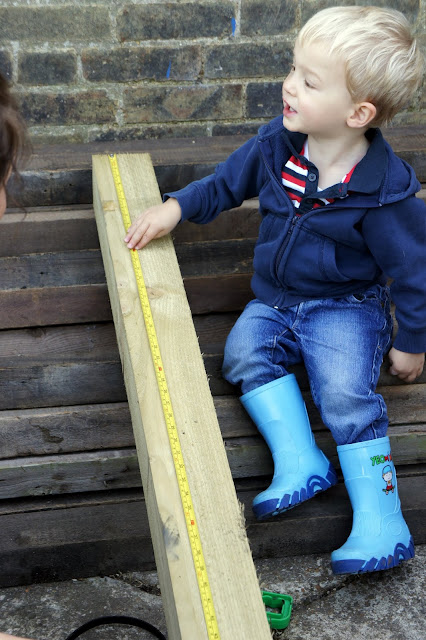 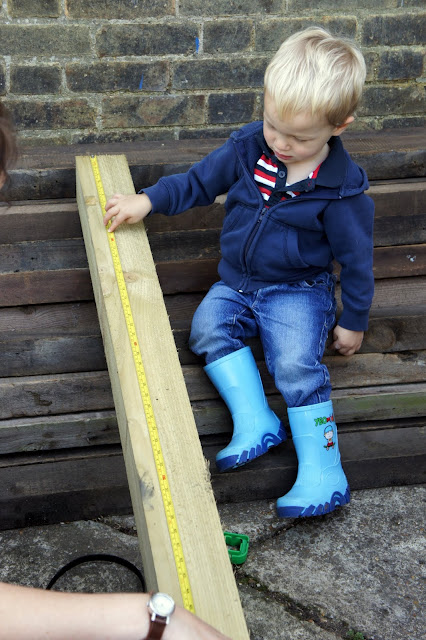 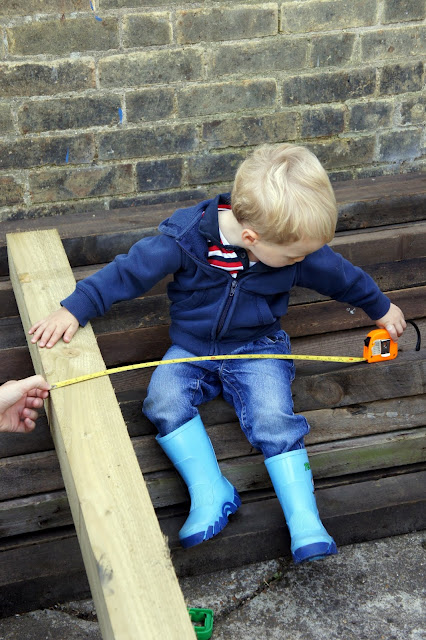 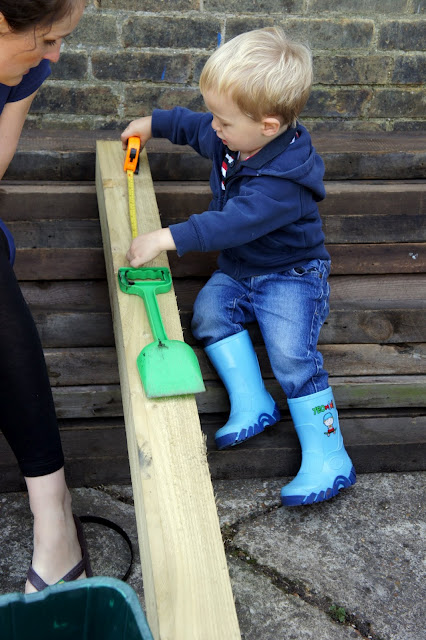 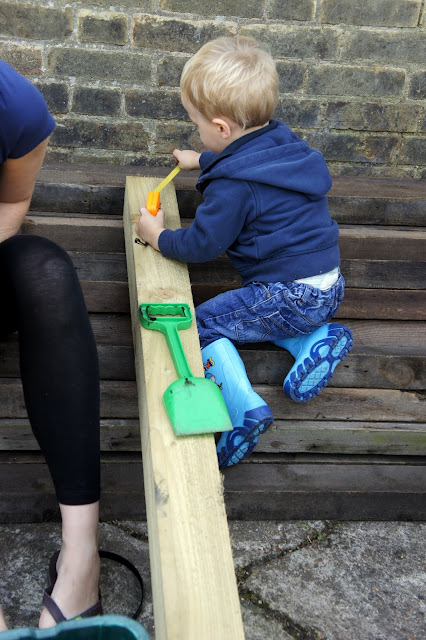 We then cycled to St Ives with Auntie Rachel and Stu to feed the ducks - actually ended up being more swans than ducks.  Its so lovely along the quay in St Ives, plus it was another beautiful weekend weather wise.  He insisted on keeping his wellington boots on and who are we to argue! 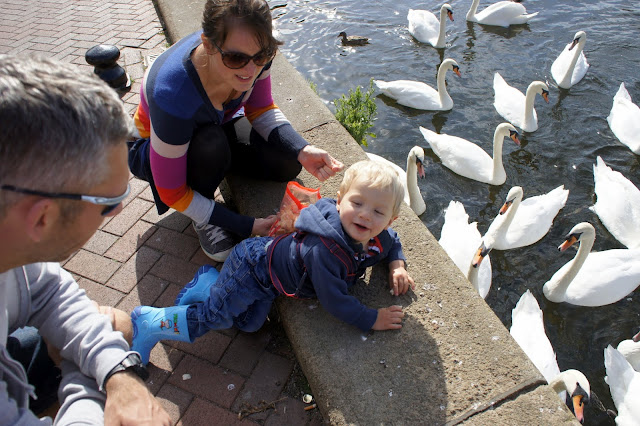 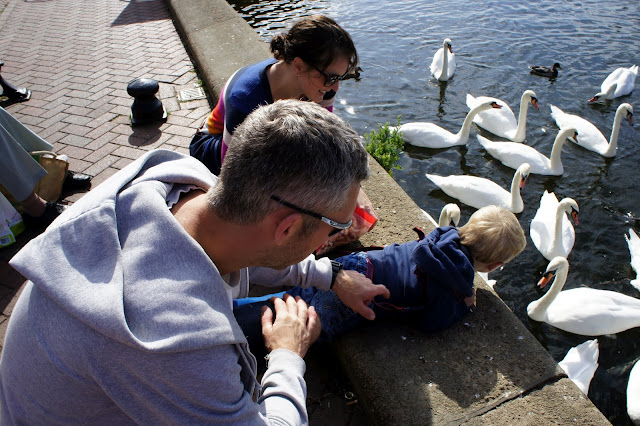 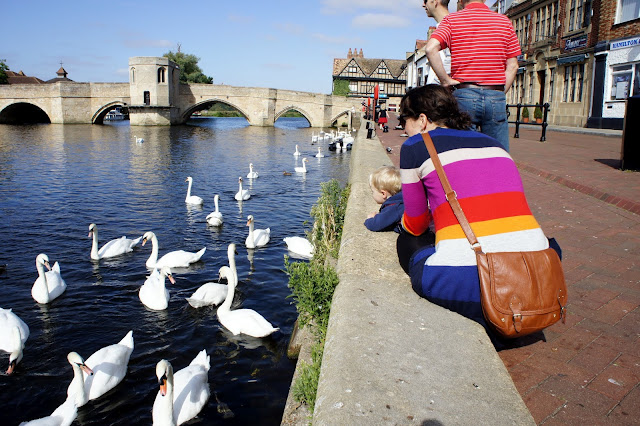 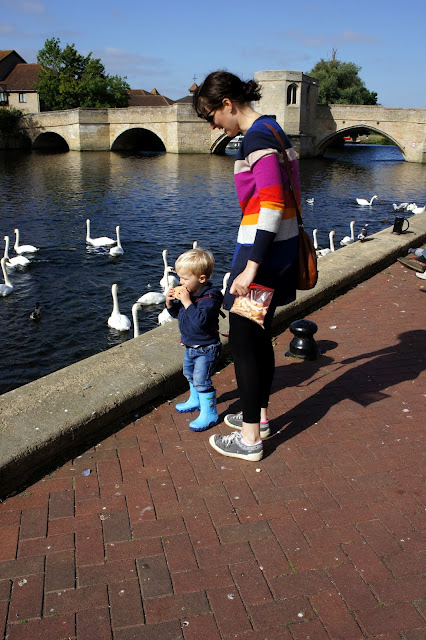 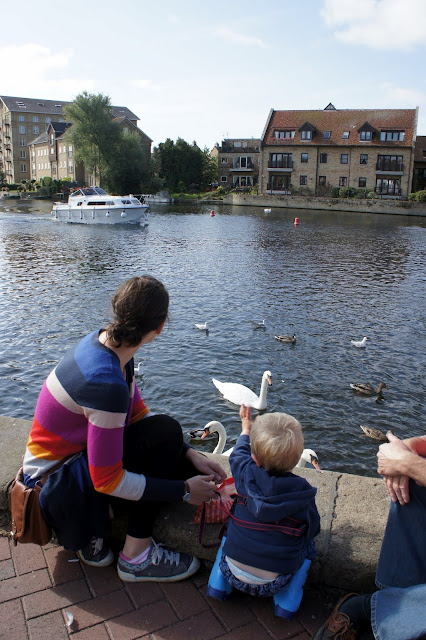 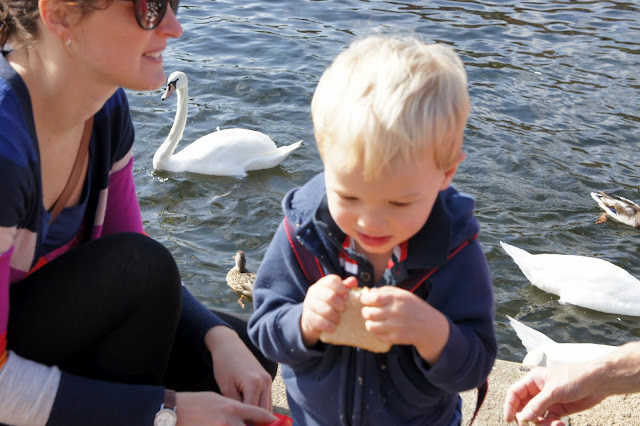 A ride on Thomas 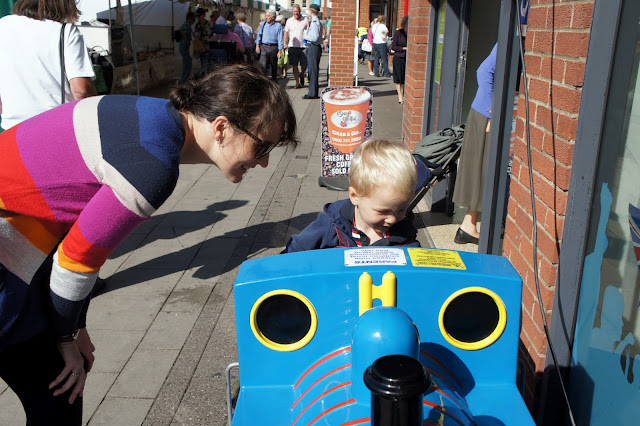 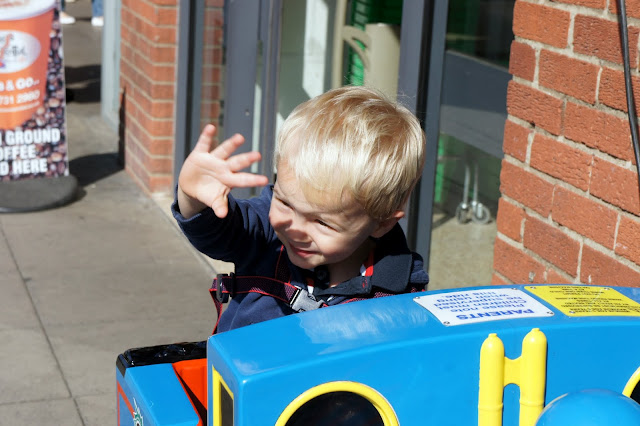 Spot of lunch at the Cromwell 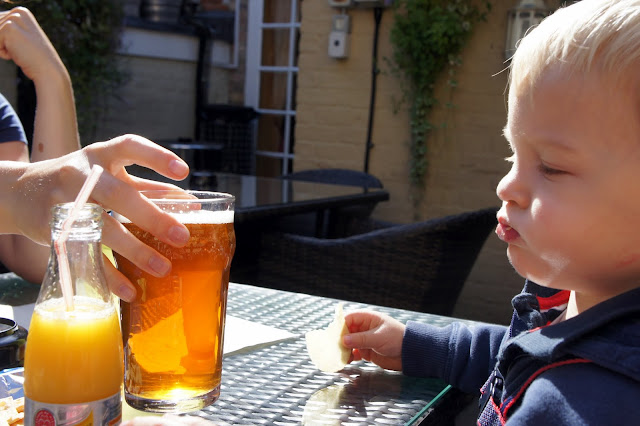 Its a shandy and he didn't drink any 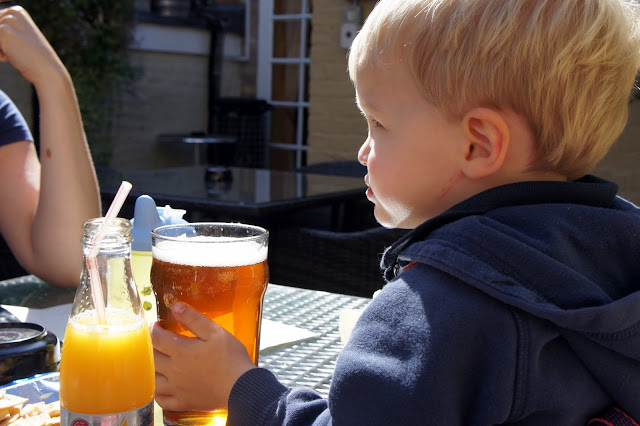 Waiting for his sandwich - scratch on his face was from a fall after the measuring session!  Boys, I'm sure his parents think we knock him about. 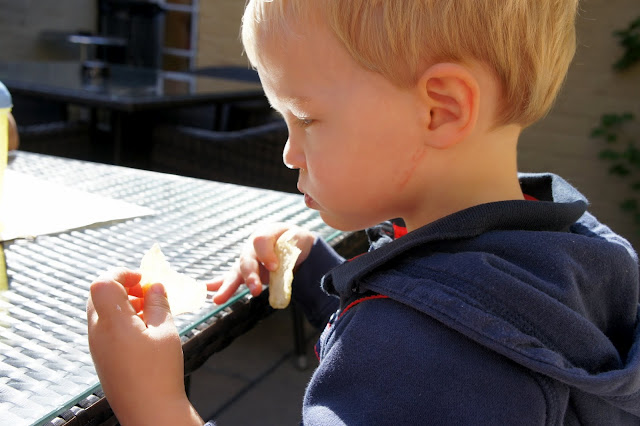 Then it was just so exhausting he had to have a sleep - he sleeps in a double bed at ours now so we have make him a 'nest' to stop him rolling out.  This was taken whilst trying to wake him up, so that we could have a quick play before taking him home! 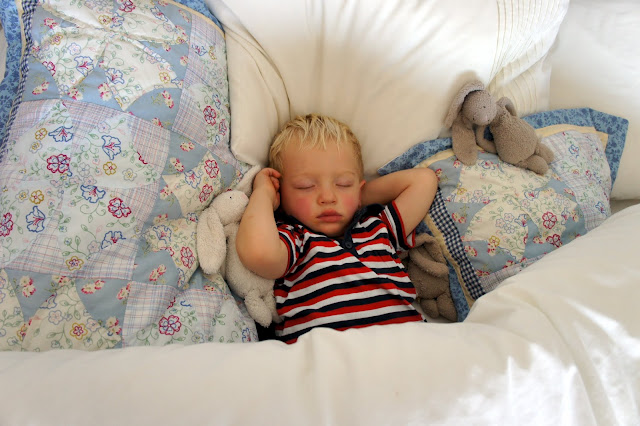 Saturday evening - wedding party.  Not a brilliant photo of the new Mr & Mrs Ward - I took this on my phone. Emma looked stunning and we had a good time, great to catch up with family and friends. 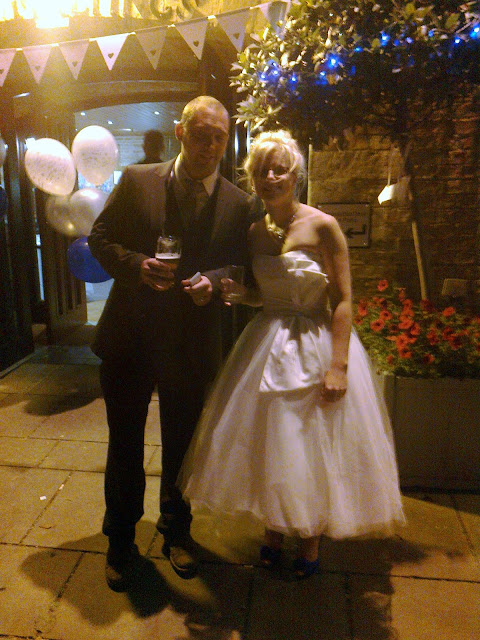 So here we are at Sunday.  Not such a nice day today, spent the morning fiddling around.  Peter and I have prepared a large bag of Sweet Red Peppers so that I can make some Red Pepper Jam, more on that later.  Possibly heading into Cambridge later for a food festival that's on in town and to meet up with Stu and his friends who are doing the Oxford to Cambridge Cycle ride today.  So catch you later, hope you are having a good one
Posted by Sue ~ Granny's World at Sunday, September 16, 2012