The old wives tale about "sitting snow is waiting for more" came true yesterday.  We had a whole load more during the evening.  We had still got a good covering in the garden from the weekend, though the roads and paths have been clear.  We woke to a sunny winter wonderland.  Thankful that we are still poorly and not going to work. 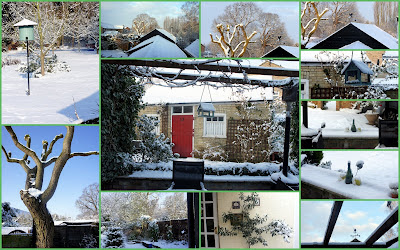 On the illness front, Rebecca is still feeling ill, totally exhausted and back in bed.  Tim, doing ok.  Me, doing ok and feeling much more human today.  Peter, looks rubbish, its all on his chest and he is bringing up, well you just don't want to know!!  Rachel has finally succumbed, bless her she called round yesterday with lemons, paracetamol, Lucozade, ginger cake and crumpets, much appreciated.
The only good thing about being off work sick is that I can indulge my knitting habit.  This is my first Ten Stitch Twist, which as I said I made into a bath mat. I lined it with an old bath towel, waste not want not.  I have a second Twist on the go in chunky yarn, which I plan, if I have enough yarn, to make into a rug for one the the spare bedrooms.  I will line this with hessian to make it a bit more robust. 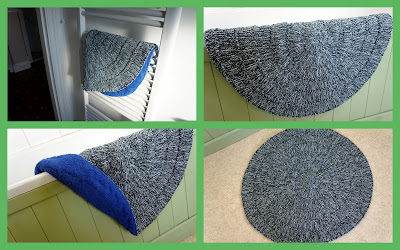 I also did a few more rows on the back of the In the Mood cardigan, but the Irish Moss stitch is getting boring and there is no shaping on the back so its just plain rows.  I have 3 pattern sets done on the front, but my head hurts too much to concentrate at present. 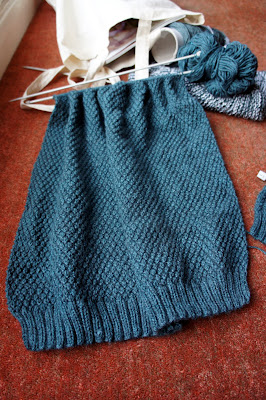