For the past few weeks we've been keeping a huge secret, one which I must admit was very hard to keep quiet about. We are going to be grandparents in June 2010, with the scan out of the way we are allowed to annouce this to the world. I did pop a note on Facebook yesterday, but felt I really must blog it. If you click on the scan link above you will see the scan picture on Rebecca's blog. So I guess I'll be boring you all with baby news from time to time.

We have just spent the last 10 days in Southwold which was a lovely break, lots of walking, eating and knitting. The weather could have been better but in November I guess you can't be too picky. I managed to knit a slipover for Peter, which ended up too big so I need to sort that, really cross actually as I'd done a tension square which came out perfectly but managed to gain 4" in the knitting! I also finished another zig zag pram blanket in pinks which I'm pleased with 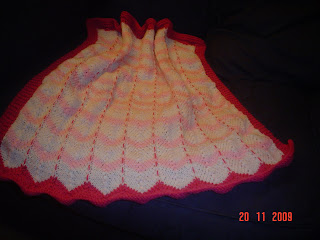 today I have been left on my own in the office/showroom, well technically not alone as I have a heating and plumbing engineer here fitting new central heating, so he keeps popping down for a quick chat and a cuppa!! So far its been reasonably quiet, a lady came in for some Amtico dresser, another to see if we had any off-cuts of granite, and a couple looking at dishwashers, sent them away with some brochures. Unfortunately I have to be here til 5pm - I normally finish at 2:30, so I have a feeling its going to be a long afternoon. The upside is that I finish today for a 10 day break, so looking forward to that I can tell you.

At some point I should start the Christmas shopping... for once I have no requests from anyone, which is very unhelpful and at this rate they won't get anything. I found the cards I bought in the post christmas sale this year and have sorted through all the leftover wrapping paper and bows etc so I know what I need in that department.

Email ThisBlogThis!Share to TwitterShare to FacebookShare to Pinterest
Labels: work

sold this little dress this week, and they want another, same size, same colour, only too happy to oblige 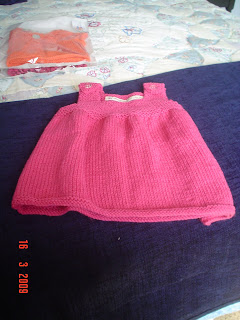 Made myself another beret and moebius, lovely autumn shades, now just need some cold weather to wear them 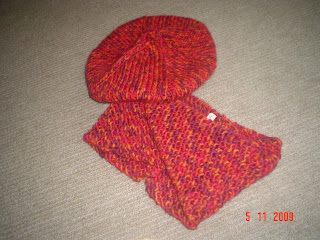 Off to the hairdresser this morning for my 6 weekly cut and colour, chat and a chance to read the trashy magazines! This afternoon my friend Helene is coming round to up date me on her travels. Looking forward to seeing her.
Posted by Sue ~ Granny's World at Friday, November 06, 2009 No comments:

as the weather was so awful I spent the afternoon knitting, well actually it had finished raining by the time I sat down, but that's my excuse and I'm sticking to it. I knitted for myself a slouchy beret and matching moebius - twisted scarf for those that don't know. They look very good, Peter took a picture to prove it but I look so awful, tired and no makeup, that I won't post it here, so I'll put a picture up when I look better, you could be waiting some considerable time! I had never knitted a moebius before and was chuffed with my first attempt at a three needle cast off, very neat.

Decided to post a picture without me in it!! 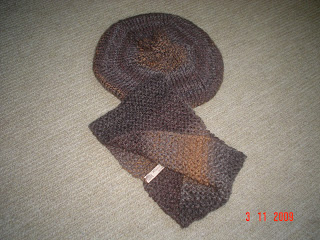 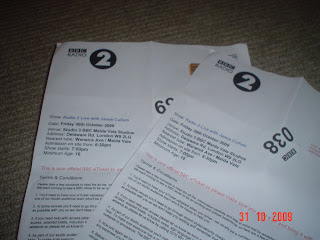 Yes, Friday night saw us at the Jamie Cullum show recording for the Maida Vale at 75 anniversary. We were in the small audience, just 75 pairs of tickets were given away + about a dozen people on the guest list. It was quite exciting being at a live recording, especially when they played in Sally 'Traffic' and the end of the Chris Evans Show, and then the news, then US, lots of clapping and whooping. The recording was just a short interview by Kate Thornton, followed by 4 songs that made up the half hour show. Fortunately for us he hung around for a bit and played some more songs.

Following the recording we went for dinner at a Persian restaurant called Kish on Kilburn High Road, so much food... I just couldn't do it justice, my stomach must have really shrunk. We then went for a drink at a pub just over from our hotel where we were entertained by the clientele..... a group of elderly Irish people who had been in the pub since lunch time, the language was quite ripe and one of the old men looked like he'd clearly wet himself! A young women who was steadily drinking to hide the fact that her 'date' was late, he did finally turn up with lots of apologies! Then there were a couple of sad looking blokes propping up the bar, who were clearly never going to pull, even if they were the last men on earth, so it all proved to be a highly entertaining evening.

Oxford Street beckoned in the morning, headed straight to M&S at Marble Arch, actually didn't get as much as I'd hoped, skirt, jumper, necklace, jeans and a rugby shirt. We did venture into John Lewis where I tried on 'the dress' I'd worn in the photo shoot, somehow it just didn't look the same with hair that looked like my finger had been in a socket (its goes mad when its damp outside), minimal makeup and I just couldn't justify spending the £149 on a dress I have no occasion to wear.
Posted by Sue ~ Granny's World at Sunday, November 01, 2009 No comments: